10 years ago I was sat in a mini bus with a pile of other extra’s waiting to be called up to try and act along side geordie sourpuss Jimmy Nail, in the 3rd series of Auf Wiedersehen, Pet. My memories of that day involved eating dinner alongside the cast in a double decker bus that had been converted into a restaurant. They were all there… Moxey,Bomber, Sergeant Lewis from Inspector Morse. The rest of the day I recall just hanging around most of the time, except for the brief half hour that I was told to stand under a tree with two other vagabonds in tracksuits and basically just loiter whilst muttering amongst ourselves.

I never pursued any other extra work after that one day. I never really thought there’d be much demand for it up north, the only tv show I could think of getting filmed locally at the time was heartbeat. So it wasn’t until a friend of mine, James, sent off some pictures and a letter of application to a local extra’s agency that I gave the idea another thought.

James got requested to be used on a gangster movie being filmed in Newcastle at the old shipyard in Wallsend, so I agreed to give him a lift to the shoot, and decided it would do no harm to ask if any other extra’s would be needed. Fortunately I was in luck, they needed more extra’s for a scene getting filmed in a disused warehouse, and after getting my mugshot taken I was requested to wait with the other eight or so warehouse workers till we were needed.

The film was called ‘Interview with a hitman’ starring Luke Goss. Older generations may recall Luke Goss as being one third of the boyband ‘Bros’, who were quite a big deal back in the late 80’s, but has since went on to have lead roles in Blade 2 and Hellboy 2.  We later more commonly referred to him as ‘Gossy’ in the green room, which was basically a disused office with some uncomfortable chairs thrown in. We all seemed to be sat around in a circle to, so it felt like some kind of self help therapy session, where at some point it would be my turn to speak about what’s ailing me. In honesty though, we had some good banter in there, it was all men, so I’m pretty sure you can imagine what topics got discussed… football, cars, how long you wait before you fart in front of your girlfriend,  etc.

It wasn’t to long before we were called to the set and given our roles. I was basically one of the heavies hanging around in the warehouse carrying a desert eagle .50 handgun in my waist band. Being worried about shooting my testicles was the least of my concerns at the time, not that there were any bullets of course.  Victor – the lead role – played by Luke Goss, would drive into the warehouse and roughly pull out his bound and gagged hostage from the boot of the car and walk him to the office at the back of the warehouse. My job was to look at him suspiciously and put my hand over my gun while giving each other a bit of stare down. 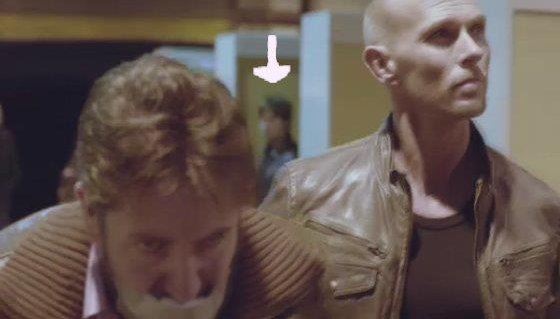 There I am, all blurred in the backround. Id like to think I handled myself with the aplomb of a professional actor in this mini role, the director praised my efforts, and ‘Gossy’ himself gave me a nod of approval.

Combined with all the other production team running around there’s quite a buzz on the set, and despite being needed for filming late into the night, the atmosphere kept us all quite energised, it was either that or the endless amount of coffee we all ended up drinking. We also got fed during break time, I was in line for my rations next to Stephen Marcus who played ‘Nick the greek’ in one of my all time favourite movies, ‘Lock stock and two smoking barrels’.

After filling my plate I went to make myself a cup of tea but couldn’t find the tea bags, eyeing up a box of earl grey I outstretched my hand and almost got it slapped by one of the runners, ‘They are for the main cast only’ he snapped I just laughed it off and settled for an orange juice instead. Aside from that one little incident the whole crew were all really friendly, and regularly asked if there was anything we needed.

I’d definitely recommend anybody to give extra work a go, just for the fun experience. You will need to be pretty flexible with your time though, since there is a lot of waiting around between scene’s, but it’s to be expected, you just need to remember to take a book to read or some music to listen too.