The boat ride to Phi Phi island was smooth, but I don’t get sea sick anyway. Next to me a chubby Thai woman sat and watched YouTube videos the entire way (around two hours), and occasionally her knee (which was jutted out to her left side because her leg was crossed over with her left foot resting on her right thigh) would press against my knee, which I wouldn’t have cared if I wasn’t trying to take a nap, but I didn’t say anything, because her comfort is more important than my nap time, and I couldn’t nap anyway because I was looking forward to arriving and meeting up with friends from overseas. Brad from Sydney, and Ola and Niclas from Stockholm.
We’d arranged to all stay at the same resort, a place called Tropical Garden. I especially like this place because it has a cool chillout area with mini-library, as well as a pool. 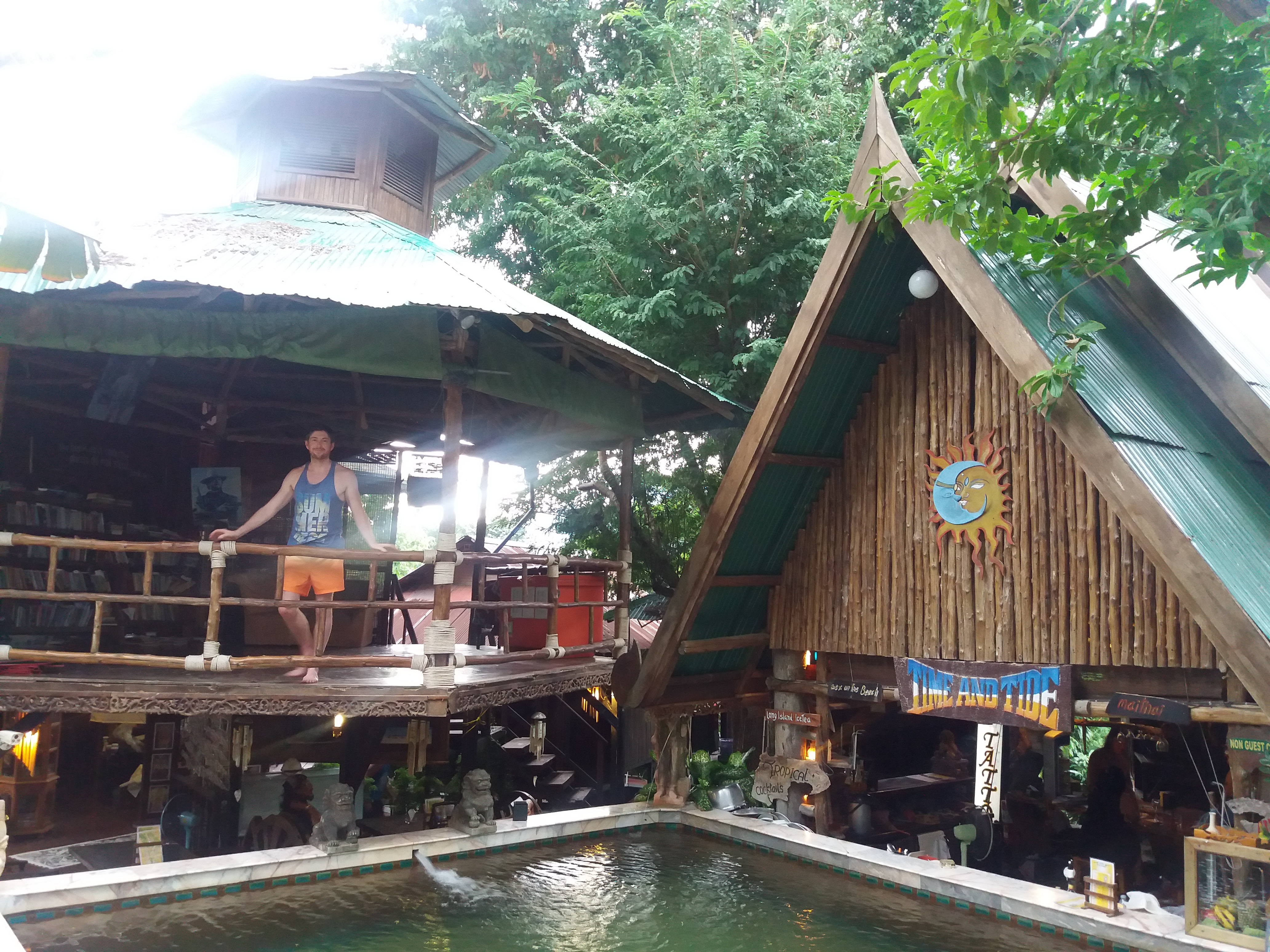 We’ve been here a week already and luckily my feet are still attached to my legs despite my ankles being ravaged by mosquito bites. The mosquito repelant helps, it’s just remembering to spray it on, but a part of me doesn’t like rubbing all those unknown chemicals onto my skin so I’ve only been applying it on the evening when the mosquito’s are most rife.

This night it’s Brad’s birthday so we’re all wasted. Just like everywhere else in Thailand you can get buckets to drink out of (a sandcastle type bucket that you use as an oversized cup to drink your spirit and mixer out of). In the party areas there is graffiti saying, ‘Fuck it have a bucket.’ So we’ve did just that. Loads of other people have said fuck it and had a bucket too and it’s a great atmosphere because there are people here from all different parts of the planet and the vibe is a friendly one. This becomes appropriately signified by a burning peace sign when we arrive at the beach where the biggest parties are. 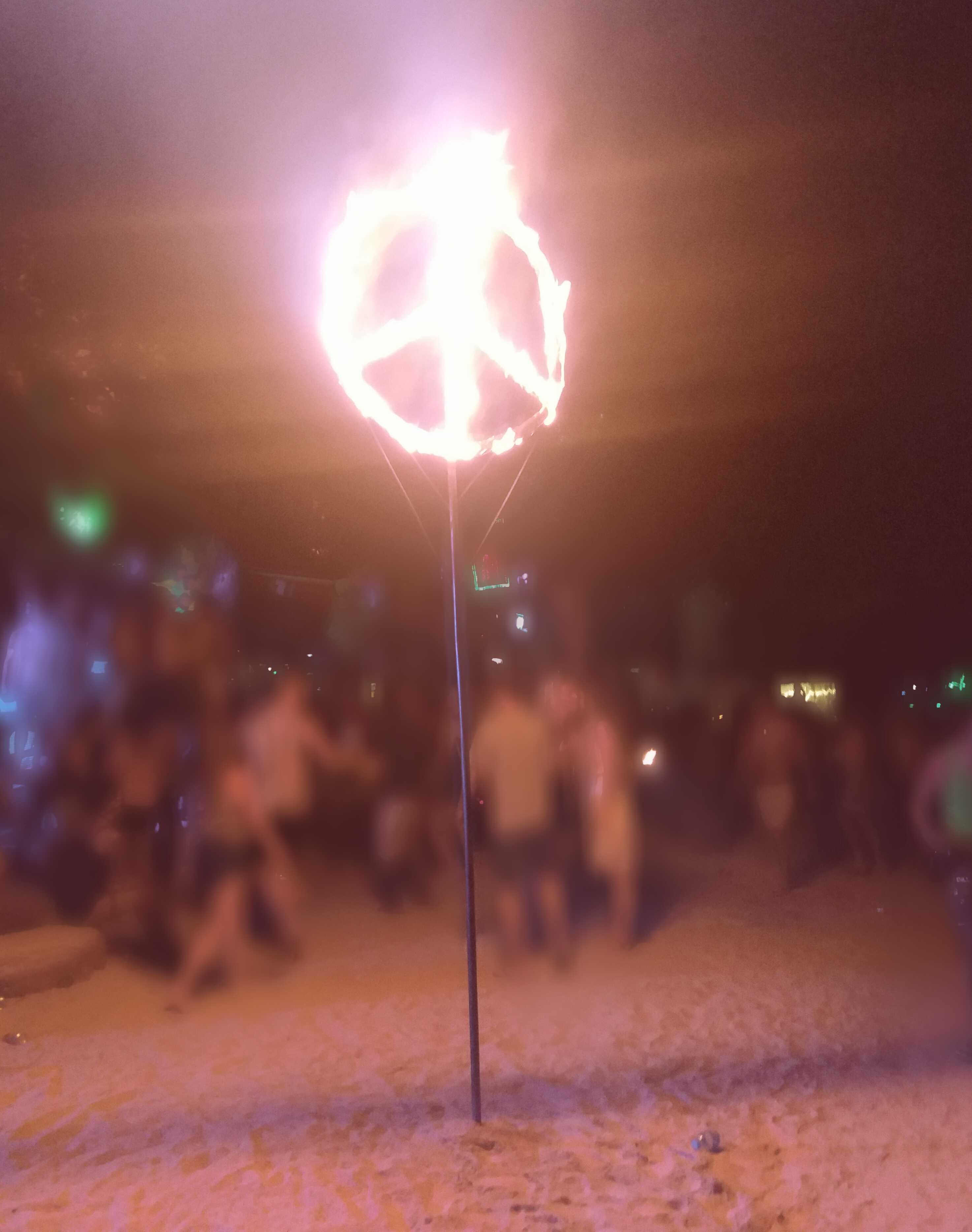 Behind the burning peace sign people are spinning fire sticks and a crowd has gathered. While adjacent to the fire show a beach bar called Slinky’s booms out music towards the ocean. Some people are still swimming in the ocean despite the fact its almost midnight. Everybody else is fixated on the fire throwers because a tight rope has been fixed in place and I think most people are thinking the same thing as me, ‘Is somebody going to spin fire while walking on that?’
It’s around ten feet about the ground and there’s no safety net, although I suppose sand isn’t such bad buffer to land on if you’re going to stumble from that height.
When the guy finally gets up there he bounces on the rope about twenty times to check if it’s taut enough I suppose. Then he throws a cigarette in his gob and starts spinning fire in each hand, while he tepidly edged his way along the rope. He spins the fire close enough to his face that it lights his cigarette and the audience erupts with applause and whistling. He even does a little kind of dance to the music while he’s up there. Everybody quaffs their buckets impressed, and then he climbs down and grabs a handful of fireworks that he lights while holding onto them. A true proffesional. Or just insane. I wonder how many scars he has from perfecting this routine. 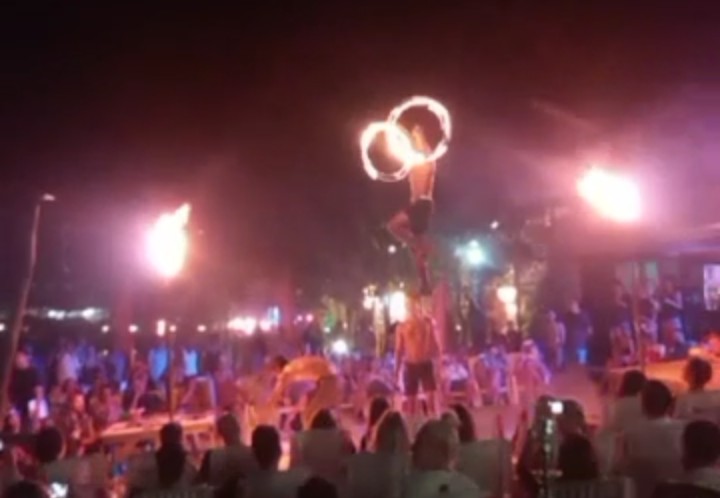 When the music tones down around 3am there are still party people strewn across the beach, all huddled in their little groups under a blanket of stars. It’s a utopian scene that everyone should witness. People of all different races coming together and enjoying life. Maybe this is as close as you get to paradise?