I’ve been yearning for a bit of sunshine ever since winter kicked in so went over to the spanish island of Majorca for a couple of weeks, staying in the predominantly german tourist area called Can Pastilla. Despite most of the restaurants only having either german or spanish menu’s there didn’t actually seem to be to many german people around. Possibly with it being early in the holiday season, it was mainly inhabited by the locals.
Many of which seemed to be spending their siesta’s eating ice-creams, given the size of the que at the ice-cream parlour each day. Understandable though… they had almost every flavour you can think of. My favourite was orange and carrot. If they weren’t eating ice-creams they were out wake boarding in the sea, waving at the tourists on the beach like something off a postcard. It was fairly quiet there compared with the only other area I’ve stayed in Majorca – Magaluf – which, with its plethora of stag and hen parties parading the streets each day seemed to be the complete opposite to Can Pastilla. I had no joy in finding a shop that would teach and hire out the equipment needed for wake boarding so I was left to spectate the happy surfers whilst amusing myself with a bat and ball on the beach instead.

The great thing about Can Pastilla was it’s close proximity to Palma the main city on the island, so after a day’s shopping and eating more ice-cream, I went to check out the cathedral of Santa Maria also known as La Seu. Walking up to the cathedral gives you a great view out over the mediteranian sea though the cathedral itself is awe-inspiring enough. With its gothic towers looming over you from every direction and the vast size of the place, I remember reading it was 121 metres long and 55 metres wide.
I’d never been in a cathedral before so was intrigued to know what exactly there is inside. After passing the dress code (moderate attire only) and paying the 4 euros entry fee I scuttled inside. Grasping an information leaflet on my way in, where I was greeted by the ‘Mirada Portal’ …an amazing piece of spanish craftsmanship. My gaze proceeded to scan the rest of the stupendous room bringing with it a definitive sense of awe. I never felt any spiritual connections in there, not even whilst looking at the ‘Capilla Trinitad’ (chapel of holy trinity) where just behind, was the body of Jaime II, and Gil Sanchez who was at one time the bishop of Palma. He must have really loved his hat because he requested it be hung over his tomb after his death. I’ve never really given much thought to what my last dying wish would be, but I’m fairly certain it would be something a bit more creative than that. I quite like the idea of leaving a large percentage of money to be used to throw a big party, so maybe something along those lines …perhaps getting a will written up would be a good idea sometime soon. 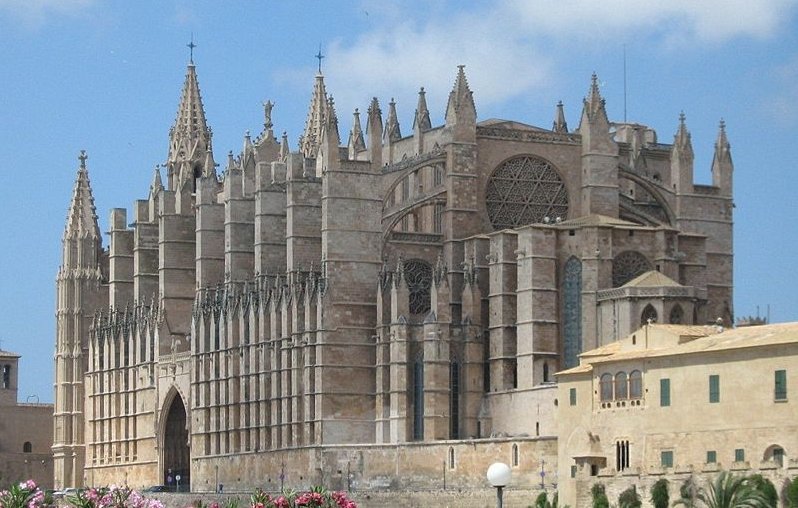 The most grandiose bit was the choir area, a 110 walnut choir stalls ascending toward the rafters. It would be amazing to hear the acoustics in a place like that vibrating around the huge pillars and stain glass windows.
Although the cathedral got started on in 1229 by Jaime I it never actually got finished until 1601, plus other cosmetic alterations being done up until 1904. So next time I hear a woman whining to their other halves about the bathroom still not being finished after 2 weeks of DIY I’ll retort this little fact to show she’s not that hard done by.
Even though it said no camera’s were allowed I did see a few tourist brazenly defying the rules, and there were also some genuine church goers in there to pray too so its important to keep your voices down.