Located on the far side of Melbourne is – to any passerby – just another ordinary looking suburban street. A cluster of detached houses, some partially camouflaged by trees and shrubbery, but this is no ordinary subarban street, this Ramsey Street!

5.36pm Monday to Friday in the early 1990’s, used to potentially be my favourite part of the day. Right after Blue Peter, or Grange Hill – depending on the day of the week – the Neighbours theme tune would begin to play from the TV, I’d usually be hastily making a quick brew and snatching a chocolate biscuit to enjoy at the same time as my favourite TV programme, if I was lucky I’d get to see Annalise’s cleavage, this was back in the day when ‘Toadfish’ was called Toadfish, before he lost all the weight, and Jason Donovan’s dad played Doug the builder.

I lost interest in the programme once I left school, but seeing as I was in the neighbourhood of where the programme – still to this day – gets filmed, I took the time out to go pay the location a visit.

In real life the street is called Pin Oak Ct. It took three attempts and one request for directions to find it but find it we did. Obviously it wasn’t that amazing, my hopes of cameras rolling and Harold Bishop giving us a wave were dashed, there was nobody in sight. It seemed so much smaller in real life, and after driving in and doing two laps, it was over, etched from being a prepubescent memory into a long term living memory. 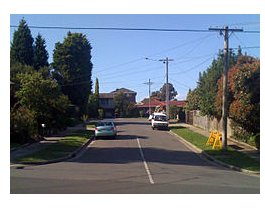 We trundled back to the main road and headed instead for a leisurely drive to a look out point called Arthur’s Seat. 305 metres above sea level, the view from the top was jaw dropping, there are lay by’s dotted along the spiralling road to the top so you can stop to take in the panorama.

There is also a restaurant at the top that overlooks the coastline so you can spectate the flurry of life while you eat or drink.