After a short interlude going through immigration at Bangkok, I was on-board the shorter flight to Krabi. I expected to sleep on the long-hail flight but like I mentioned already, it didn’t happen, partly because of Hans Toadman, but also I’m just not comfortable falling asleep in a chair, no matter what position you try there’s just no way to get fully comfortable. By this point I was starting to get tired, but also hungry, so was jubilantly woken from dozing when my adjacent passenger gave me a nudge to let me know the inflight meal had arrived. It probably looked slightly odd to go from sleep to mouthful’s of rice in the space of around thirty seconds.

Finally outside in the Thai air, the heat pressed against me as I left the aircraft, a welcome relief from the freezing temperatures back home. I feel no remorse for the scarf wearers I’ve left behind. Inside Krabi airport I realised why they call the place Krabi. A crab around the size of a large man’s hand scuttled past me as I left the toilet. Nothing seems quite as bizzare as seeing a crab in an airport, but this is Thailand, so you gotta expect the unexpected.
I bought my shuttle bus ticket to Ao Nang beach for 150 baht (almost 4 euros) and stood at the back of the mini van for the twenty minute journey with a constant drip on my head from the worn out air con unit, occasionally tilting my head back to let it drop on each eyelid as refreshment, while a Brazilian looking child looked at me befuddled.
Once checked in I was greeted by my bunk bed sharer, an Italian guy called Nico. I like Nico, he has a warm friendly energy and speaks with the kind of passion that I wish I could have. It gives him charisma. 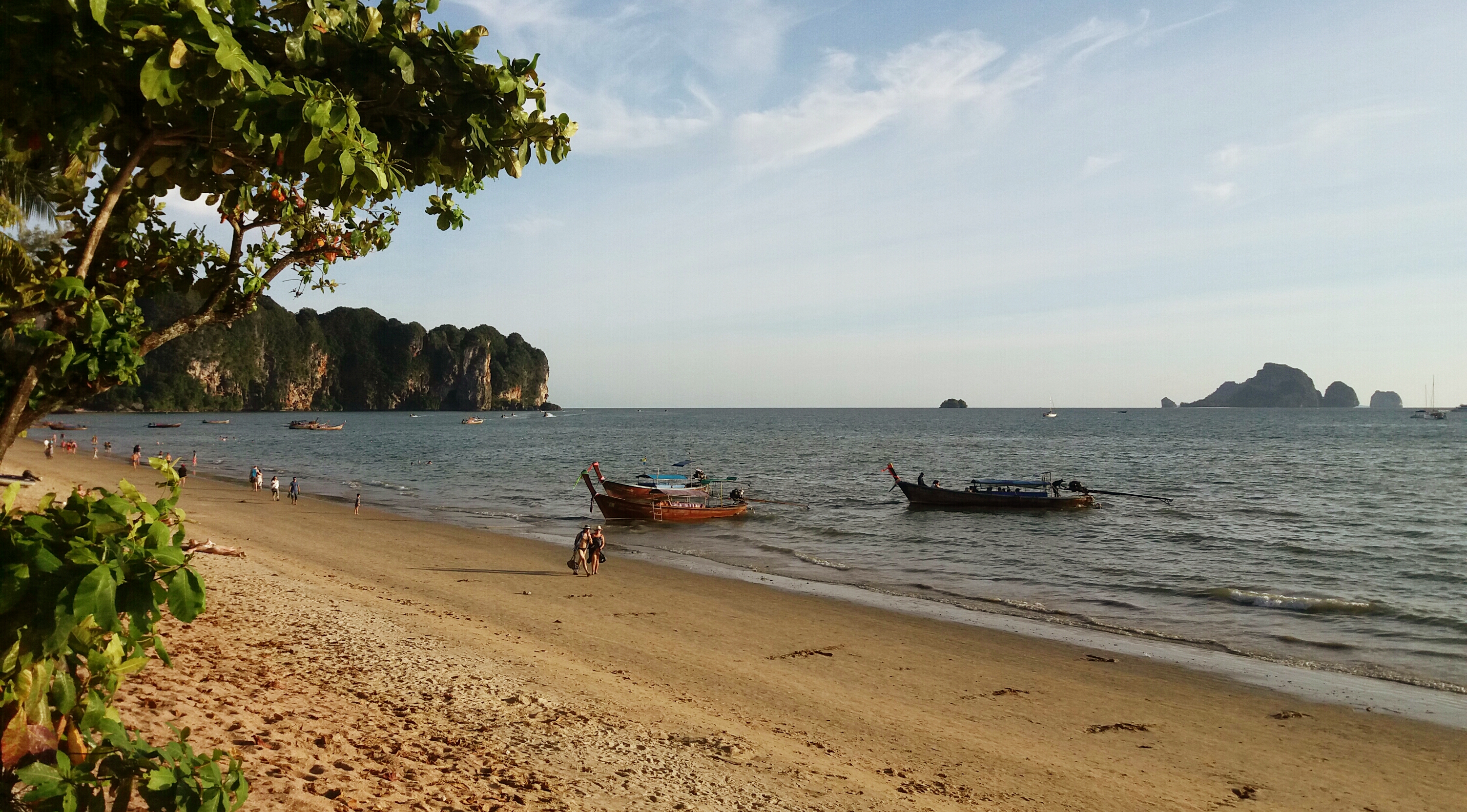 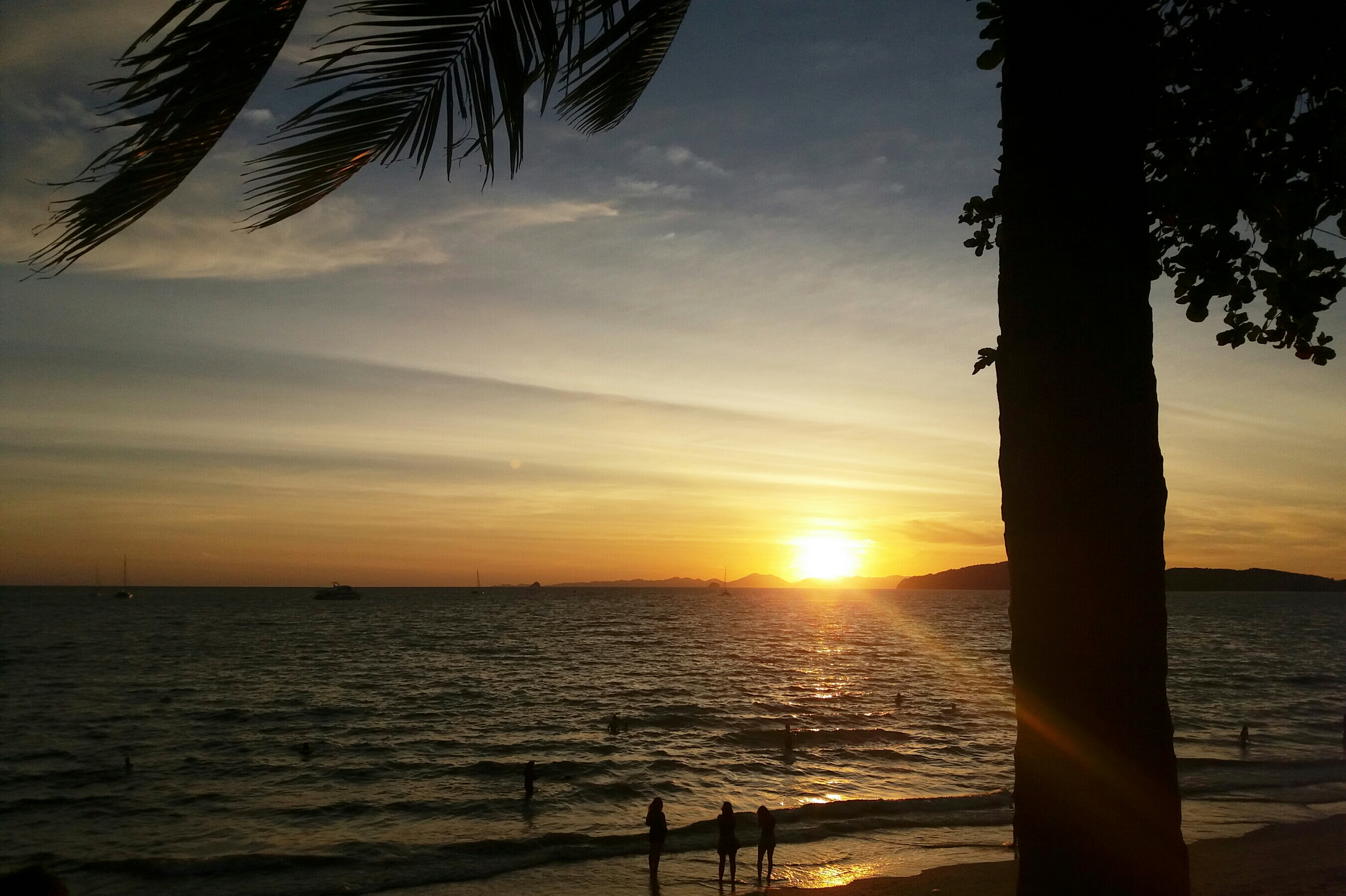 It only took two days before I was addicted to Thai fruit shakes, now I’m up to three a day and I have no idea what they put in them but I suspect it’s a lot of sugar and possibly cocaine (not really).
As you can see, the beach is nice and you get a decent sunset view, but by far the best thing about Krabi is the price of everything, compare it with other parts of Thailand and it’s one of the cheapest places to stay. You’ve also got tons of options on boat trips, day trips, trips to Krabi stadium to watch Thai boxing matches, cool nightlife and a great allround chilled atmosphere. None of these were particularly the reason I chose to come and spend time here in Krabi. The biggest factor was the convenience of getting to phi phi island where I’ll be spending two weeks pretending I’m in some kind of James Bond movie, drinking dry martini’s and strutting around in the surf of a turquoise ocean. You can only get there by boat from Krabi or Phuket. I chose Krabi.
I’ve been accosted each day of being here by well dressed Indian men trying to fix me up in a tailored suit so just to shut them up (and sticking with the James Bond theme) I’ve finally accepted their offer. I’m assuming that don’t have tailors on Phi Phi, so having a suit custom made for me while I’m over there will be a cool souvenir to come collect on my way home.