I’m back in Prague now and the white bits still match the rest of my body, I guess the factor 25 did it’s job while I was in Thailand. My temporary new living acomodation is in Prague 10. I like this neighborhood, it’s serene. People shuffle around the shops while walking their chiahuahua’s on leashes that look like pieces of string, and their owners are kind enough to clean up their pet’s turds as opposed to some parts of Zizkov. Everything seems to move more in slow motion here and the area has character. There’s a cool church that looks like it could have been designed by Frank Lloyd Wright, it stands out against the surrounding shops and apartment buildings because of its quirky style and each time I pass by it makes me smile and think of Howard Roark from the book The Fountainhead whose character was based on F.L.W.

What I like best about this part of Prague though is the fact its replete with quiant little parks. Cute miniature ones like Haroldovy Sady that you can use like your own back garden if you wanted to sit outside and have a picnic. It even has an old piano that people sit and play, making it feel like you’re a part of an old black and white movie. 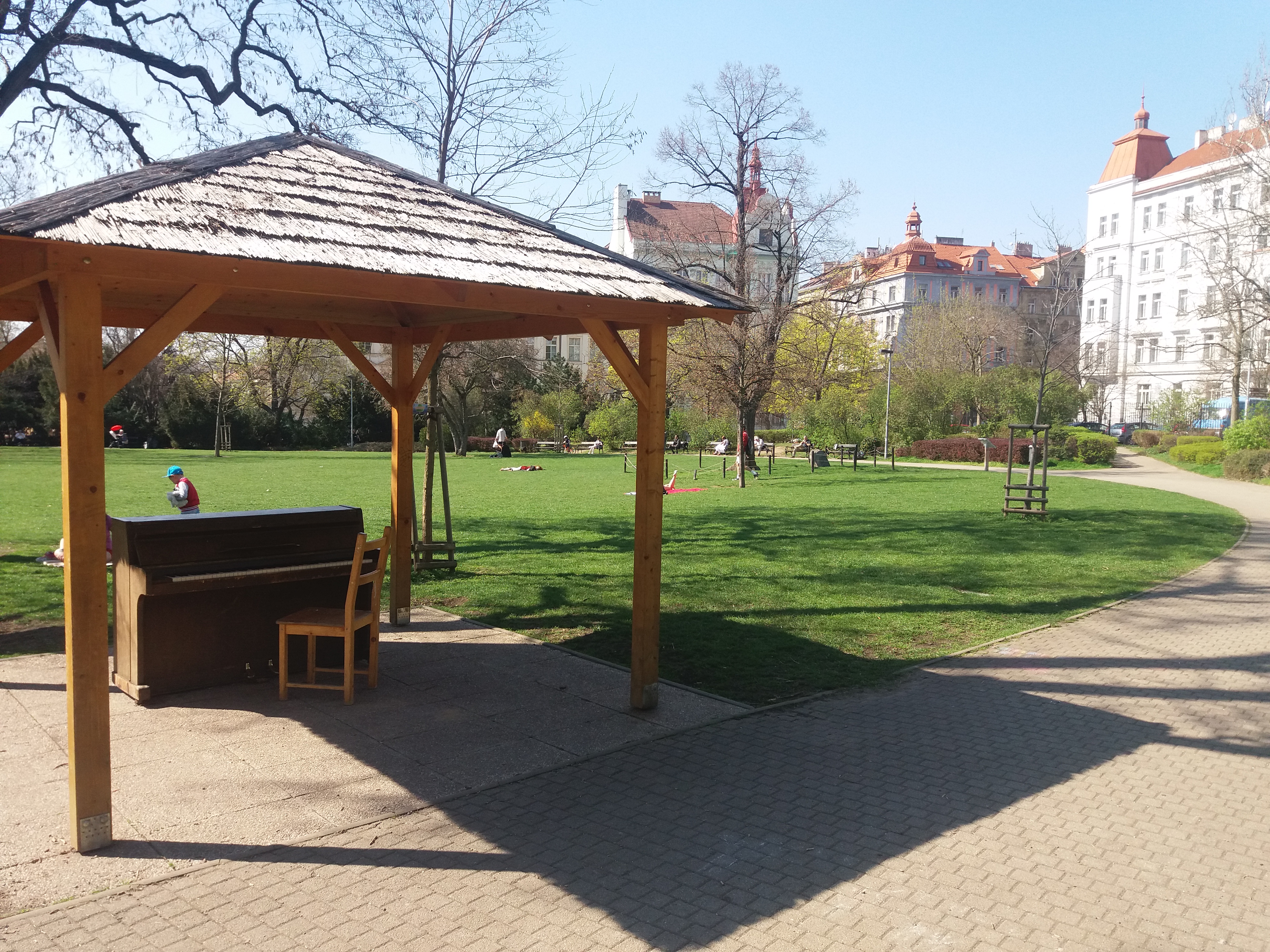 Then only two blocks away is Havlickovy Sady, the largest park in the neighbourhood. Full of vinyards and striking neo-renaissance buildings like the villa gröbe. People get married here, or some I’m told. I can think of better places for a wedding if I’m honest, but it does have that cool southern view of the city for memorable pictures.

I’m looking down on those streets below while a couple stands next to me, the girl is plump, wearing cheap leggings and a purple anorac. Her presumable boyfriend, I notice, has a cast over his nose and bruised eyes. When he notices me looking for more than is required from a glance, I make a mental note not to look again. It reminds me of having to wear something similar when I got attacked years ago. The third bone in my body to have broken up until that moment in my life. After the recovery the doctor said to be careful not to break it again.
Then six months later I clumsily walked into a ladder and did exactly that. Unlike the almost unbearable pain of snapping my arm or fracturing my heel in three places, breaking my nose didn’t really hurt, in fact, it was almost the opposite, there was so much adrenaline pumping through me I felt like Wolverine.
It was a good reminder not to shy away to much from the fear of pain. Some of the most exhilarating activities are the ones that are the most dangerous. Yeah you could play it safe and never get hurt, but is that really living your life to the full? I like the idea of going into the morgue and having the undertaker wondering how I managed get myself so fucked up. I want him to look down and think, ‘Wow this guy must have really took risks and lived a full life,’ and for it be true. I want him to poke and prod at all of my scars (of which I have four so far) and for him to wonder what could have caused them. With a bit of luck he may even question his own existence to the point of making a dramatic decision to suddenly take up motorcross or ice hockey, or some other jeopardous hobby. And then with some extra luck he’ll perhaps tell others about his profound realization that his life was lacking some epinephrine inducing kick and inspire those people to live a little more too.
Like the majority of us though he’ll more likely continue to work his 9 – 5 job and simply exist, perhaps he’ll choose a new place each year to have a holiday but at least that’s something to excite his brain from the monotony.
A leaf has landed on my head and snapped me out of my daydream. Nature telling me to wake up and go put a jacket on because I’m fooling myself into thinking it’s t-shirt weather in Prague already. It’s not. Next month it will be, but I’ll be in Zagreb by then.