While still in finland, and evidently still recovering from the emotional scars the laughing children had left me with up on the snowboard hill, I was fortunate enough to be offered the opportunity to do a husky ride in the finnish outback – a snow covered wonderland full of oversized xmas trees – I’m not sure exactly how much it cost because the excursion was paid for as a gift from my then girlfriend’s generous mam.

Being escorted through the woods to the signing in cabin you could already hear the wolf style howls well before you could see the husky’s. Then on arrival there were 2 to 3 log cabins and around 20 large cage kennels with all variety’s of blue and brown eyed canines all pleased to meet you with tails wagging. Each one’s bark translating to, ‘Pick me, pick me!!!’ They were obviously aware that any new visitors meant a chance to have a run about in the forest, even though it would mean hauling our heavy bodies on a top of an even heavier wooden sled. 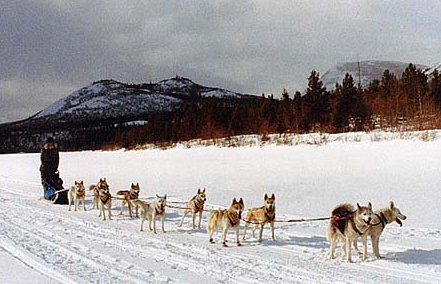 There were six dogs chosen in total, it’s funny how rather than picking the happiest most excited dogs you become all sympathetic and prefer to want to pick the quiet subdued ones who look a bit depressed in the hope you’ll cheer them up a bit. Each of the six seemed more than happy to have won the day’s lottery and managed to contain their excitement whilst getting fastened up for their run.

Our guide explained that he would be riding about 20 metres ahead on his snow mobile and the dogs were trained to follow him. All you have to do is lean in to the corners to help the sled run smoother round the bends.
So off we went, with a big jerk we were immediately reaching faster speeds than I expected, I think it feels faster too because of being sat so close to the ground (think sledging down a really steep hill while looking at six dogs asses and your almost there). When the wind chill hits your face its both exhilarating and almost slightly painful so remember a scarf and good quality gloves! 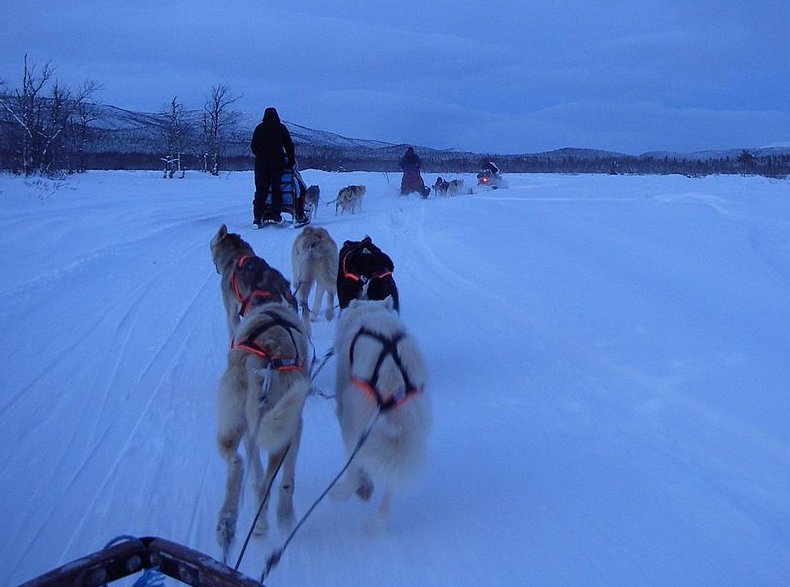 It was a great thrill that lasted around 15 – 20 mins. Wearing a raggedy old pair of adidas meant that by this point my feet were so cold I was more than ready to dive into one of the log cabins and put my feet up by the fire… unfortunately I was a little overwrought and practically put my feet into the flames, singeing my thick socks and almost burning my toes. At this point one of the workers came in bringing us sausages to cook over the fire. After catching sight of the smoke coming of my incinerated socks that were now hung up, he gave me a confused look while he passed me a cup of tea.

After a little research I think on averages it’s around 50 euro’s per person, but I’m guessing each place is different so you’d have to check if this comes with the added extra’s of food and drinks afterwards.