I’d arrived in Canada. It was a surprise visit for an old childhood friends birthday. The plan was to casually walk in the restaurant where him and his girl would be eating dinner. By a stroke of good luck the restaurant turned out to be in the same street as the hotel I’d booked.

After the initial shock, hugs and smiles, we sat in the restaurant and discussed what to do with the week or so I’d be there.

“This birthday’s a bit of a milestone, is there nothing memorable you’d like to do?” I asked.
“Well, there is something.” He said. He looked at me curiously. He had curious looking eyes to begin with. They became more curious looking as I also looked back with my own curious eyes.
“Ok, go on.” I muttered, intrigued.
“Have you ever heard of a Dutch guy called Wim Hof” He asked.
“Yeah, of course, the iceman right?”
“Right, the iceman. So you’ve read up on the benefits of his advice on taking cold showers and cold exposure, etc.”
“It was a while back but yeah, it hyper energises your immune system and increases testosterone right?”
“Right. Well. We’ll be getting the first snowfall here soon. I’m thinking I wanna go full Wim Hof and jump in the lake. I’ve been pussying out of doing it all this year. We could do it together.”
I wasn’t altogether thrilled with the idea. I’d tried the cold shower thing and hated it.

“Yeah, maybe.” I said. Then I changed the subject.

A few days later we sat in my friends house, we had the whole day to ourselves with no plans.

“So, ready to jump in the lake today?” He asked.
I looked at the online weather report, “It’s forecast to be 4 degrees.”
He stood up from the couch and walked passed me into the kitchen. He stood there staring out the window while I watched wondering what the hell he was staring at.
“Thermometer says it’s 1 degree at the minute. I say we go as soon as we can.”
I got up and looked at the thermometer I hadn’t noticed  stuck to the outside of the window. 1 degree celsius.
“You’ve got a death wish. What if we have a heart attack?”
“Then it’ll be an epic way to go.”
I shook my head.

“I’m gonna put on some Wim Hof videos to get us in the mood and do the breathing exercises to prepare.” He smiled.

We sat there and breathed in and out heavily thirty times then held our breath. It was starting to feel like I was stuck in a bad movie.

“Feel good?” He asked.
“I don’t really feel much different.”
“Lets do it again and this time hold your breath for longer at the end.”

I still didn’t feel much different.

After the breathing exercises we jumped in the truck and drove to the lake. We managed to find a nice secluded part of the beach next to the shore. There seemed to be nobody about, ‘Good,’ I thought.

We stripped off on a little terrace and were about to do the breathing exercises again when a little old lady walked by.

“Ooo going swimming?” She chuckled.
I just smiled in return.
“That’s the plan, thought we’d do something unique as it’s my birthday.”
‘Geez let’s not encourage her to spectate,’ I thought.
“You boys must be tough nuts.” She grinned. Her cheeks crumpled like used wrapping paper.
I was glad when she wandered off.

“Lets get this over with then.” I smiled.

The purpose of the breathing exercises is to flood the body with oxygen. For whatever reason it has the added benefit of helping you withstand the cold more easily. Although I’m fairly certain that’s more of a mental attitude. I was pumped but still slightly hesitant. He casually strolled in and dunked himself in the cold cold water. I was a little more theatrical and pegged it. Running in like a mad man and spraying freezing water all over his and now my, submerged body. 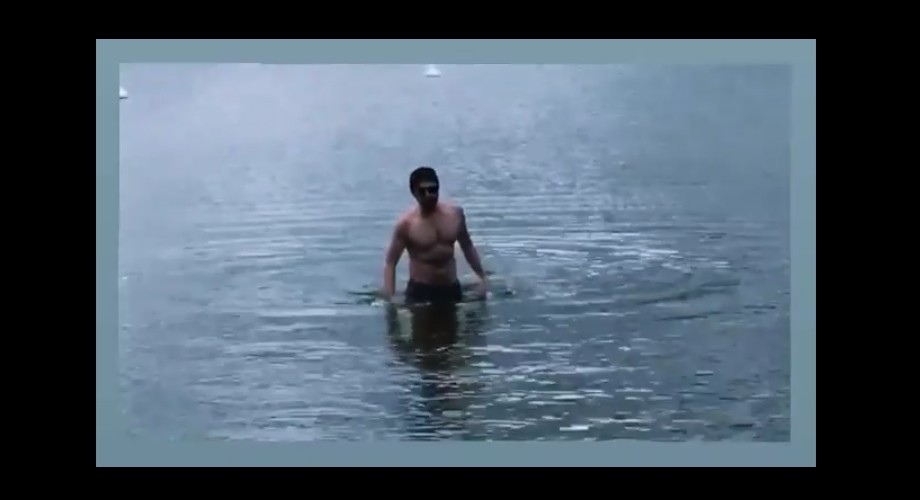 It wasn’t anywhere near as bad as I expected. ‘Maybe that crazy Dutch guy is onto something,’ I thought. I was back out as quick as I’d gone in, while my mate stayed sat in there trying to make it to two minutes of submersion.

Once I came out I told him to film me. “I’m going to do better this time and I want it recorded.”

I ran back in. Only this time I done a little breast stroke and tried to stay in for more than a few seconds.
It was uncomfortable but bearable. The real thrill came after jogging back out of the water. As far as natural highs go this was pretty far up there. I felt invincible. It reminded me of the scene from the movie Get Him To The Greek where the character played by Jonah Hill gets stabbed with adrenaline… “I’M ALIVE!!!!”
For some unknown bizarre reason a man (or possibly woman) had pulled up in the car park and was watching us. This was no ordinary person, I swear they were dressed in full knighthood regalia and brandished a sword by their side. We ignored the oddball. I didn’t care who was watching anymore. Every fiber of my being felt energised and for use of a better word woken. The general malaise and hum drum emotional state was replaced by a feeling of invincibility. It was great.

“I’m doing this more often.” We both agreed.

After this little dalliance with the cold I’ve decided to give those icey showers a proper go. I feel a thirty day challenge is in order. Watch this space.