It never fails to annoy me how all advertising is made to have you feel like you don’t have enough possessions in your life already, but then between these frabjous pictures in a travel magazine I came across an article about Ibiza. I love Ibiza and have been several times before. The article  mentioned cool places to eat, drink and party, but then it also mentioned about the O’Neill Oneway Runway modeling competition. A contest with a difference, here the catwalk actually runs along the top of a cliff and at the end the girls had to jump off. It was all designed to draw attention to a new bikini O’Neill was launching… the Superkini, designed to stay on during watersports etc.  The competition was free for spectators, so I logged into facebook for more information, decided the whole concept was a cool idea and booked my flights.

Three weeks later I’m layin on Cala Bassa beach watching them set up the runway for the competition. More than 2000 girls had applied and over 30.000 Facebook users chose 3 finalists. The other 9 finalists were hand picked by an expert panel of judges, including former Victoria Secret’s model Elyse Taylor, professional surfer Raine Jackson and representatives from Next Model Management.  My mate Luke who also came with me to party all night in Las Vegas had decided on a whim to join me and booked his flights the day before we left. As we lay there looking out over the sparkling blue ocean, chilling to the ambient beats the dj was playing in a purposely constructed dj booth just to the right of the runway, we decided to head off for something to eat since we had a few hours to wait before the actual competition began.

Just to the left of a driftwood sculpture of a horse at the back of the beach there is a restaurant, but after talking to a friendly bohemian looking girl she recommended to walk about two hundred metres up the coastal lane to a quaint italian restaurant called El Parral, I ordered pizza which was 8 euros and a 3 euro bottle of water, the pizza was much bigger than I expected, and once stuffed there’s a cool chill out area with swinging chairs and a hammock to relax on.

We wandered back to the beach. With the competition due to begin any minute we perched ourselves on the opposing cliff to the runway just to the left of the judging panel (our heads are in the bottom left corner, me with a beard and Luke in the red t-shirt). 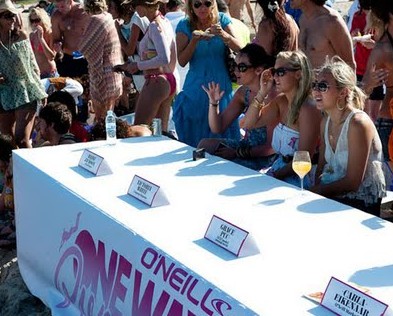 We figured it was the best place to sit except for the fact we never brought anything to sit on and the rocks were quite jagged. A Michael Winner lookalike had the right idea as he trundled into the cove in his speedboat just to the left of where the girls would be jumping.

They had a giant size screen set up with underwater cameramen ready to catch all the action as the girls dived in, which when in comparison to the turn out of spectators all seemed a bit ecessive but also made it feel cooler because of it being such a seemingly underground event.  There were probably less than 100 people there including the 4 judges and O’Neill staff. Like most other people that were there me and Luke had a judging competition of our own and decided our favourite was Tatjana Maul, a beautiful brunette from The Hague in The Netherlands. She was equally as attractive as the rest but she had éclat that was different to the rest, she looked like she had the most fun whilst on the runway and diving in. 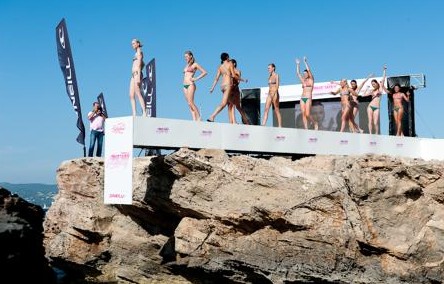 Unsurprisingly she won! Her prize included a photoshoot with O’Neill for their forth coming Spring/Summer 2012 collection and a 1 year modelling contract with Next model management. The new bikini seemed to be a success as they never fell off any of the contestants. 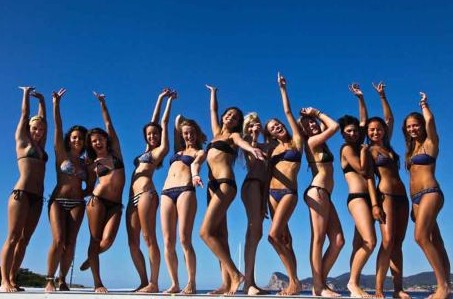