You wouldn’t expect a big city like Melbourne to have penguins living on its shoreline, but sure enough go down to St. Kilda’s breakwater pier and they’re there. Tiny little things they are, the smallest in the world in fact, around the length of your hand from beak to webbed toe.

When we got there it was just after sunset, ideally we should have got there about a half hour earlier but we were still optimistic about sighting one. So were around 80 other people, all lined up along the pier poking there necks over the rocks. Every now and then you’d head a few ‘Coo’s’ from people who had spotted one, so we’d shimmy in amongst them but not be able to see anything.

Then we noticed a guided tour using special rose tinted torches to shine between the rocks so decided to tag along. I’m not sure if the tours are free but nobody contested our involvement. Out of around a thousand that live at St. Kilda we only seen two in amongst the rocks looking all coy and frustrated for not having any privacy. 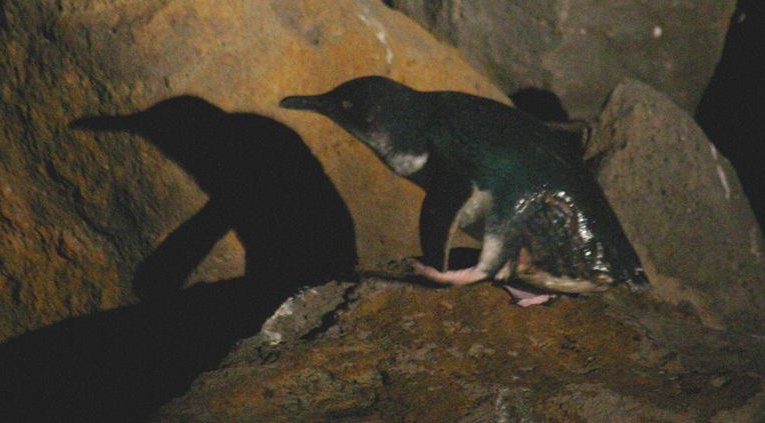 The breakwater itself was built in the 1950’s, but the penguins weren’t spotted until 1974. There are only seven different species of penguin in Australia, with a large colony being close by on Phillip island. I never had chance to visit but was glad I at least got to see the ones at St. Kilda.

Just as we were about to leave, another one began to skirr toward us from the sea, they use their flippers to propel themselves, and their feet as rudders. It hopped out of the water then went all shy and hid behind a rock. Everybody ‘awww’ed’ as we left to go eat ice-cream and stroll around the rest of the area.

There were some cool seaside bars and restaurants there too, and there is no  charge for walking along the pier to spot the penguins.