For those who’ve never heard of it CenterParcs is like a secluded little holiday village set in forests or woodland, hidden away from any nearby towns so pretty obscure if you’ve never seen it advertised or know anybody who’s been there.

Kind of like a large scale leisure centre but with lots of little log cabin style ‘villas’ to accommodate you, and a lake for doing water sports. The villa’s or, lodges as I think they’re now called are great because you can have actual log fires inside. Perfect for in the winter months like while we were there.
One of the other best attributes is the wildlife, because your right in the heart of nature there’s a variety of tame furry or feathery creatures that regularly come curiously meandering past your door every so often.
But the unique selling point of each park is its subtropical swimming complex, this haven of slides, rapids and waves is one of the only activities that is free of charge. Although there are many other sports and and games to be played, the free swimming ‘paradise’ can keep you entertained for hours. 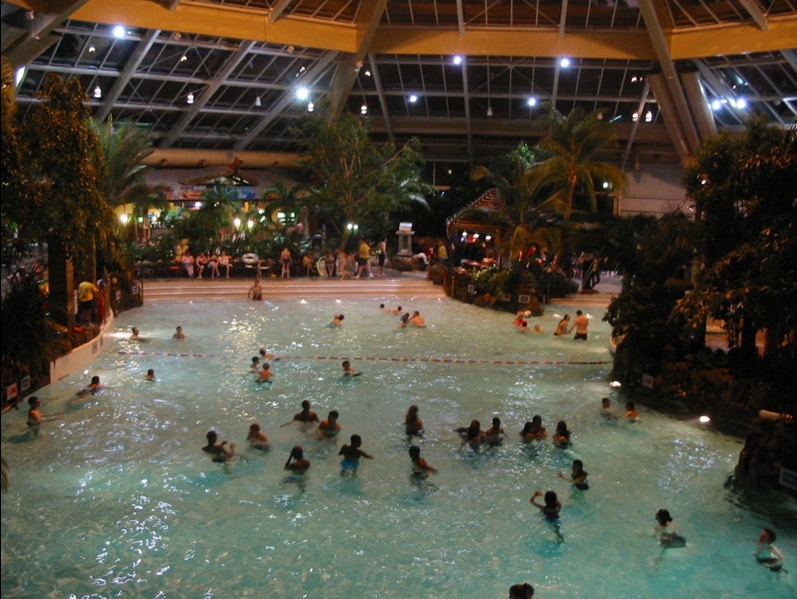 This was all a distant memory from my childhood when I entered the hemispherical glass dome that houses the swimming activities.
On first sight the inside of the dome seemed smaller than I remembered, and there were more tropical trees and plants than expected too, evidently they were real. The constant high temperature and humidity were obviously keeping them alive and healthy.
Where to go first I thought? The obvious place was the main pool itself. The wave machine began to cause a tide horizontally sweeping across the deeper end of the pool. We all waded in.
The water was warm and pleasant, feeling refreshing after an afternoon of running around a badminton court and walking through the cold woods outside.
Soon we were barely able to stand without the waves tumbling overhead. Jumping to stay afloat we decided to find out where the actual slides were, and gently swam toward the nearby stairs that led to a separate part of the dome.
I clambered out and pointed toward what looked like more stairs leading up to a precipice. Once at the top there was a birds eye view of the whole complex, making it look much larger.
I peered infront of me, before me was a dark tunnel, enveloped in brick red plastic casing, with a sign to my left showing the correct posture – seated. When the green light illuminated, I squated down, but slipped and tumbled into the darkness, rolling over onto my back as the water slid me down a steep decline, suddenly entering into a right hand turn and almost flipping me over to me front. I started to gather speed, bearing my weight on both shoulder blades and the heels of my feet. Perhaps not the brightest idea. Another sharp turn whilst at the same time water engulfed my face and streamed into my mouth and eyes. As it drained from my cheeks, I regained my vision, opening my eyes to see trees and stars, I was outside and the roof of the tunnel was no longer there. Without a moment to admire the night sky I was hurled down another decline and sharp turn. This time there were amazingly strong currents pushing me under the water sending me spiralling endlessly  at what I soon realised was the end of the slide.
As I emerged disorientated I noticed I was still outside, laughing at the noticeable adrenaline rush I had just received.
I looked back toward where I had just come from and seen my friend James sent underwater too. As he came up gasping for air, also disorientated, he turned to get a handle on what exactly had just happened, but as he turned he was adjacent to the rocky wall and ‘CRACK’ slammed the side of his face straight into it. Blood started to run down from the bridge of his nose, although he seemed completely unaware as his adrenaline to was churning through his body.

We immediately got him seen to and the lifeguards were really helpful. It was nothing an ice pack and a plaster couldn’t sort out, but we spent the following hour relaxing in one of the several jacuzzi’s.

Quite the change from being a child when the fun never seemed to stop. After five more trips down the winding water chute’s my body was begging me to stop. Later that night there were even the odd ache that I hadnt anticipated, but it was worth it.

My Dad never used to like the idea of flying so CenterParcs was the nearest thing we got to a proper family holiday. Aside from the weather though its probably one of best environments to take kids on holiday because there’s simply so much you can do there! As a sidenote its generally best to book your activities in advance if you want do the things at a time that suits you best.

Cars are not allowed to drive around within the village unless permitted, so everyone either rides bikes (you can take your own or hire them) or simply walk since nothing’s to far to get to. You can also take your own food although there are plenty of places to eat when your there, and remember to take your own towel and sports equipment unless you plan to hire them.