Just got back from Las Vegas, I’m surprised to have went back to be honest. I’d been there once before and had not been that fussed on the place. In hindsight though, I was only there a couple of days the first time, so I didn’t really get to fully experience what the adult playground had to offer, whereas this time I had plenty of time to experience the delights of the neon wonderland. There was two reasons I decided to go back, the first being that a close friend of mine (Ste) was already in L.A. and wanted to see Vegas before he flew to Australia. Also it was mid – late November and I’m not a massive fan of the english winter weather. Over the last decade (aside from last winter) for most of the UK it generally doesn’t have much snow, so people never seem prepared for if it falls heavily. By the time my flight was booked, snow had started to fall, so people were already beginning to panic because it was more than an inch! There was already gridlock on the roads and occasionally flights were getting cancelled, so I was fortunate to have crossed the atlantic at all. My other buddy, and sidekick, Luke came with me too, and first on the agenda was to see the clubs Vegas had to offer. The clubs we visited while we were there were The Bank at the Bellagio, Studio 54 at the MGM, Drai’s Nightclub in Bill’s Gamblin’ Hall & Saloon, XS Nightclub at Encore and LAX at Luxor. Out of all of them I’d say XS was my favourite, the layout and atmosphere was on par to most other superclubs I’ve been too, they even have an outdoor pool to dance and splash about in. Since the temperature was around 15 degrees (59 fahrenheit) there was no-one jumping in, which made it slightly odd to see a podium girl dancing on the other side of the pool in a fur coat.

The people were the most friendly there too, and unlike LAX and The Bank there was plenty of space to move around and chat to people if you didn’t have VIP status. If you do prefer to have your own couch and velvet rope, I’m pretty sure this just involved agreeing to spend a lot of money on drinks, but this didn’t really interest me since I hardly drink, plus, I get more of a buzz from chatting to all the odd, strange and wonderful people in the other communal areas of the clubs than the ones perched on their seats of sanctuary. I don’t resent VIP areas though, in most bars and clubs I’ve been to I think they are needed, or else how would professional sports people and celebrities get to go for sociable drinks without getting hassle. Vegas though, is different, because it’s so image conscious the VIP areas (at least of the clubs I went to) are strategically placed around the centre of the club with a kind of ‘you can look, but you’ll never pass my maroon velvety rope and touch me’ policy. Even brushing past those aristocratic impediments could get you a bright torch light shone in your face from one of the burly security guards, followed by a vehement request for you to ‘move along’.

The only downside to XS was the drinks were the most expensive there, I only bought one drink, a pernicious shot of absinthe which forced me to sound like the godfather for the rest of the night, that was 14 dollars, and I think beers were around 10, though even at the other venues the drinks were only a couple of dollars cheaper. If you prefer to drink lots, and get excessively inebriated, the bottle service they offer might be a cheaper option for you. 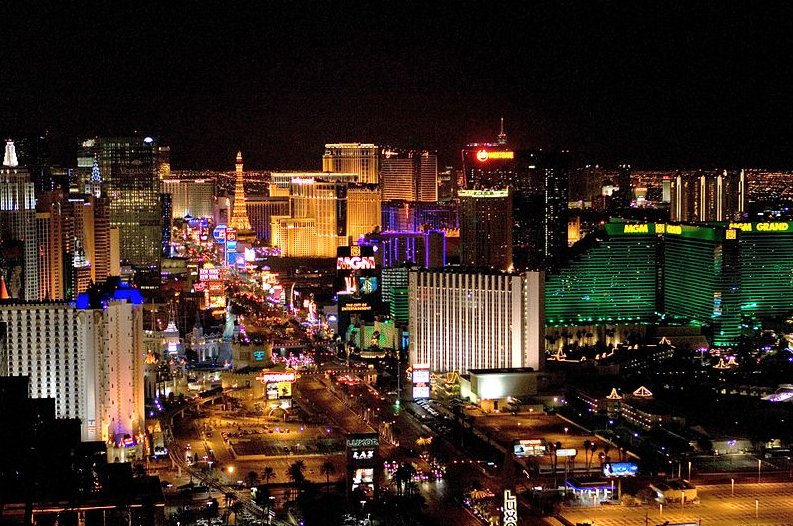 Congratulations if you are female, most of the clubs offer you free entry, you may need to get a free pass off the guys on the strip or sometimes the hotels stock free passes (usually found near the entrance where they keep all the tourist leaflets and information) unfortunately if your male you are more likely to receive exlusionary treatment, but the free club passes can get you discounted entry (usually 20 dollars instead of 30) should you be among the auspicious few that get plucked from the queue. The way around this is either arrive early enough to be among the first few in the club, or (the much more fun and challenging way) meet and attract some top heavy girls on your way there and suggest they join you. For obvious reasons they prefer there to be more women than men in the clubs, so if you turn up with an aesthetically pleasing girl on your arm you will be almost guaranteed entry.

It’s not Benidorm so don’t turn up in your bermuda shorts and lacoste copy t-shirt because you wont stand a chance of getting in, and you’ll probably get a few snobbish looks of disgust for trying. The good news is, because they are so particular about who gets access it means there’s usually around a 50/50 ratio of men and women.

Most clubs close around 4am but there are various places open all night. We often went to the fireside lounge at the peppermill, a flurescent pink lit hideaway with a laid back ambience and a dancing flame over a water feature in the centre of the room. If your trying not to waste money gambling, I suggest not sitting at the bar, because those dastardly poker machines may very well inveigle the weak minded amongst you and sooner or later the computer always wins. There’s plenty of other big comfy seats to park your bums on anyway, so that your not so easily distracted. You may even have the pleasure of a whoopi goldberg doppleganger attempting to seduce you like I did, not my type, but adorable and interesting to chat to nonetheless. ‘That was a gift, how often does a whoopi goldberg lookalike come on to you!’ Ste interjects, as I retreat.

We exited the building and jogged over the car park to catch the 24 hr bus that runs up and down the strip. Taxi’s are around 18 dollars to go from one end of the strip to the other, but the buses are way more fun and you can ride 24hrs for 7 dollars. You often get lots of colourful characters riding the duece, and on this particular occasion I got accosted by a homeless, pirate of the carribean wannabe, with an actual parrot on his shoulder. He points at us and gruffly announces we remind him of his favourite band – The Goo Goo Dolls – this causes him to immediately take a liking to us, and so plonks his parrot on my shoulder and his hat on my head whilst telling us his plans to move to Maui in Hawaii, and spend the rest of his years residing on the beach being a surfing pirate, ‘Aarrrg.’ His parrot, who’s name I forget, decides to roost itself on Ste’s shoulder instead, much to his trepidation, since he was more concerned than I was that the feathery friend might do a poo. Aside from the loose threads and peck holes the parrot has made, the pirate costume is the best I’d ever seen, I’m sure it must have been used on a film set at some point.

We finished the night at McDonalds after our bus ride, where you’ll more than likely bump into some weird and obnoxious characters at that time of the morning, but they’re all harmless really.