I went back to the Uk from Amsterdam but was only in England for two days and then it was back to Prague. Nobody had told me it had been snowing there. It felt oddly satisfying to feel and hear the crunch of it all beneath my feet, almost as good as stepping on an empty cigarette box and feeling it crumple as your weight crushes it (try it, go for the ten deck if you can) .It was time for change. So before flying out I got on airbnb and decided to find a deluxe new apartment at a decent price. I knew it would only be temporary this time because I’ve booked a trip to Thailand in February. For this reason I was willing to pay a little more than normal, but then I seen this villa/apartment which was within my normal budget, but listed cheaper because it was further outside the city. 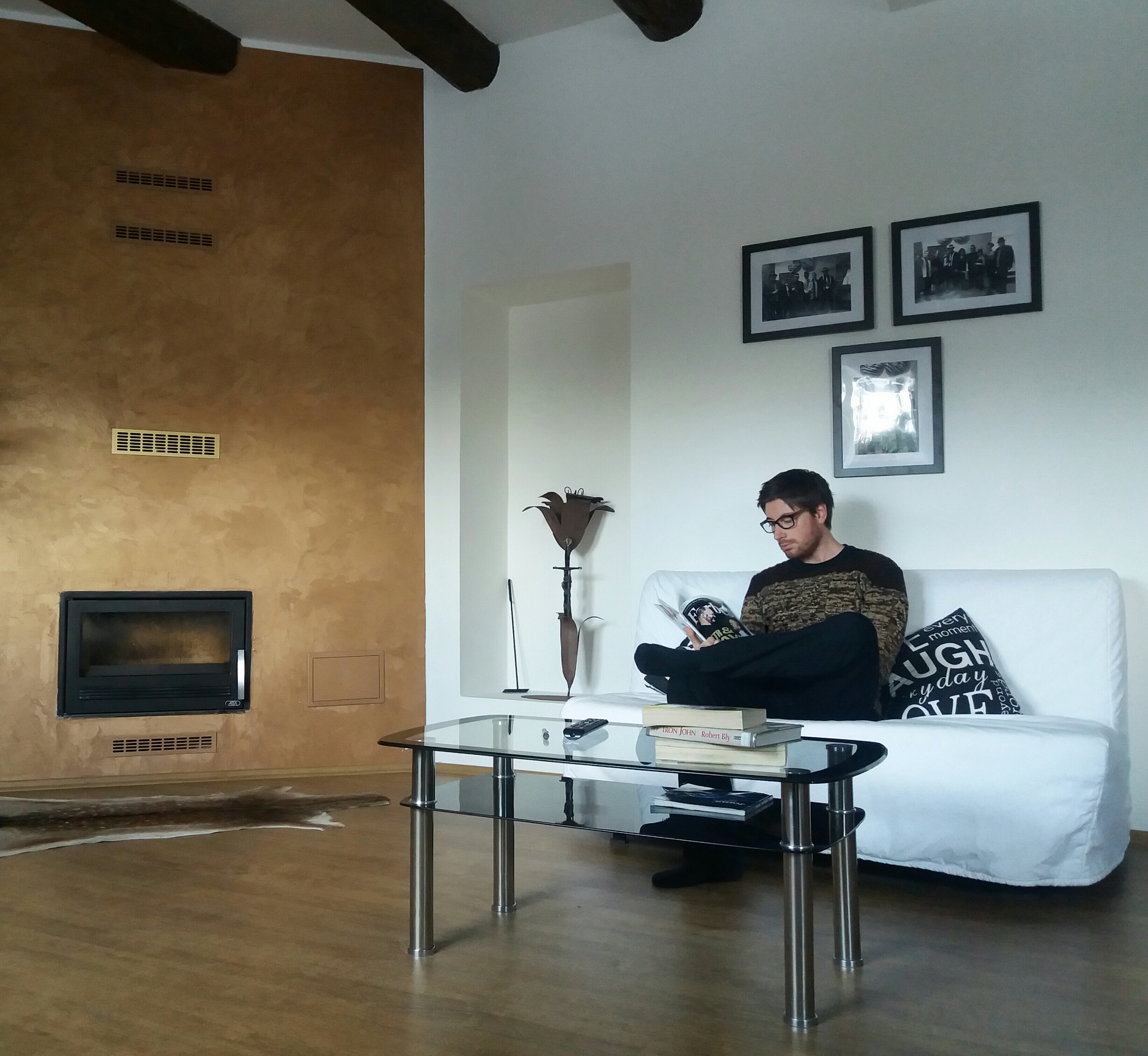 That’s me pretending to read Forbes magazine in the lounge. I don’t usually read Forbes magazine.
It has an open fire, that I still haven’t used yet because I need to get some wood. Even though there’s lots of wood outside, but its wet, so I’m going to find a petrol station, I think they’ll sell it. Then I can sit in front of the fire on a night and stare at it like a caveman would have. There’s something primal about staring at a fire that I can’t explain, and it’ll feel even more caveman like given the fact there’s a fake dead animal fur in front of the fire too. You might be wondering why I even bothered to get an ostentatious apartment in the first place. Especially given the fact I don’t really have expensive taste in things normally. I think i just felt like a change, a treat to myself maybe, we deserve a treat from ourselves sometimes, if I stayed in a luxury apartment all the time then it wouldn’t feel luxury anymore. Plus it’s really super cold outside right now so most of my time is being spent indoors, although I do wish I had a sledge here when I look outside at all the freshly laid snow. Maybe I’ll buy one, would be fun to spend the day on a hill.
I have an early memory of going sledging, and I remember being jealous of a group people that had stolen a long plastic roadwork sign that fitted all five people on it, they were going way faster than everyone else on the hill. Maybe I’ll ‘borrow’ a roadwork sign. Or maybe I’ll just use a black binbag and see how that works. Or maybe I won’t go sledging at all and I’ll just be a caveman in my pimped out cave. They say the fastest way to live the life of your dreams is to pretend you’re already living them, does that mean if I live in this posh apartment then I’ll wind up living in a similar one permanently? I don’t even think I’d want that. I’d rather have a little cottage with a big pond outside, or maybe near a lake that I could swim in. There’d be lots of animals running around because pets enhance your life and they’re funny to watch. For now I’m not fussy where I live because some people have nowhere to live so we are the lucky ones. Imagine being stuck outside in the freezing temperatures at this time of year, unless you’re Wim ‘The Iceman’ Hof it would be torturous. It’s a shame everyone can’t be like Wim, he says he can heal himself from the inside too, using just his mind. Even had someone inject him with E-Coli to prove it. Maybe I’ll learn The Wim Hoff Method and the take caveman living to the extreme by living in the woods like some kinda wild man. I doubt, but anything’s possible.