I’d been hearing good things about yoga, but never really put any effort into seeing what it was all about. As fate would have it, a friend of mine got in touch unannounced enquiring if I’d like to be his new yoga buddy, ‘Well, I’ll give it a go, but if I’m face to ass with someone in front of me and they can’t help but fart then I may not stick with it.’ came my reply. 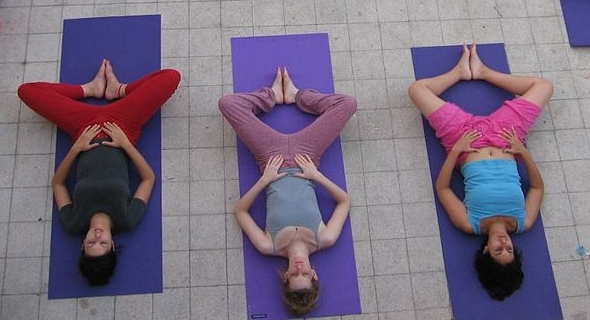 I tried two different styles of yoga that were taught by two completely different people.

Ashtanga was taught by Phil, he was ex-military and later informed me he was once junior longboard surf champion. There was no question of his skill when it came to coordination and balance, at one point during the class his left leg was entangled through his arms whilst he stayed positioned controllably on his right leg without any difficulty whatsoever. Whereas I could barely get my left leg high enough to get my arm underneath, whilst at the same time hopping around like a pogo stick that’s been brought to life by a wave of Mickey Mouse’s magic wand.

There were a lot of inverted positions, and compared to some of the attendees I had to have brief rest periods for fear to much blood to the head was going to cause me to faint. I never felt out of place resting though, ashtanga is known for its progressive and rapid series of postures, so there were plenty of others who found it tough.

The movements are designed to produce intense internal heat, purifying sweat that detoxifies muscles and organs. The expected result is improved circulation, a light and strong body, and a calm mind.

After a short meditation period at the end I managed to curl myself up off the floor and I definitely felt lighter. I found it tough to synchronise my breathing with the dynamic flow of the postures, so my mind wasn’t as calm as it would be without practise, but with all the focus and conscious breathing I can definitely see the benefits when it comes to controlling emotions.

There were distinctively fewer people there and for some unexplained reason I instantly didn’t approve so much of the vibe, I don’t know if it was the instructors, or the crowd, they were pleasant enough and gave no real reason for me to feel uncomfortable, it was just one of those underlying feelings that kind of says to your senses that this isn’t for you.

The postures were much slower and had to be held for longer periods of time. Maybe because I had something to compare it to it made an easy decision to stick with ashtanga, although with the slower yoga class I did leave the class feeling much calmer.

Personally when it comes to quietening the mind and gaining control over emotions I feel that meditation alone is much more powerful. I am still going to keep up with ashtanga yoga though since I felt it was a great way to practise conscious breathing, keep fit and release tension.