Just got back from a dreamy haze of a weekend. Beyond it’s potential seedy image, Amsterdam is more than just brothels and coffee shops, it actually has a very clean feel to it, the people seem happy (I have to assume not everybody is high who lives there) and there is great architecture. Throw in some fun bicycle rides plus great shops to peruse and you’ve got yourself an awesome city that caters to everyone’s needs.

There are special offers on cruises leaving from North Shields (just outside of Newcastle) all the time so for a meagre £39 (2012) each 4 people can share a cabin based on 2 nights aboard the ship.

We decided to extend our stay so that we had 2 nights in a hotel over the weekend in the city. My plan was to stay straight headed so that I could enjoy the two nights out without my brain acting retarded, but it never happened, call it peer pressure, or simple lack of will power but I ended up spending my entire time floating from one coffee shop to the next.

I’ve smoked weed before and I’ve been to Amsterdam before but never had I noticed how trippy the buildings are, one looked like it came straight from the pages of Alice in Wonderland, and some of them looked like they were about to topple over. This, by the way, was not a hallucination, but with the added effect from the cannabis it did seem overly strange.

We tried three different blends of weed while we were there, blueberry, mango, and lemon haze, the fact they all happened to be fruits was just a coincidence. Sat there staring out the window watching the world go by with the cliche Bob Marley music playing in the backround, it felt like the same feeling you get when someone gives you a hug, all warm and fuzzy, like nothing really matters in that point in time. This started a never ending debate on whether or not getting high makes you more present to the moment, which then somehow diverted to whether one our friends sat there should have been born black instead of white, followed by fits of laughter, and then followed by the best tasting Belgian waffle and hot chocolate I’ve ever had in my life! 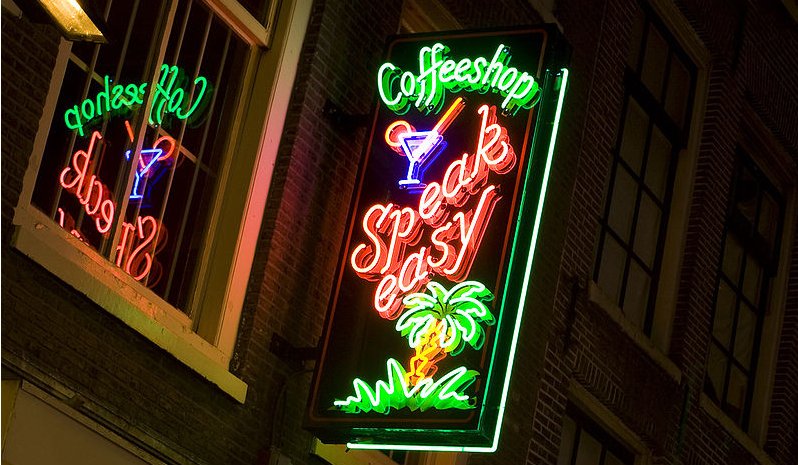 Most of the coffee shops seemed to be dotted around the red light district. Like with any big city, be careful of pick-pockets, and keep your wits about you if you feel like you’ve ended up in any unsavoury areas.
If your visit is purposely for the coffee shops the prices of weed starts from around 10 euros per gram, and most drinks in the coffee shops are around 3 euros.