My family don’t celebrate Xmas, they never have for all of my life so I’ve never really known what to miss, but it did suck not having Xmas as a kid.
Despite the unfestivities I kind of wanted to be in England for the holidays. I kind of wanted it to snow while I was there too, but it didn’t.
I left Prague to spend the next two weeks back in Newcastle, as well as visiting friends in other places in North East England.
A few days after I got there my friend Sahand came up from London, he’s not from London, he’s from Stockholm, but with Iranian heritage, which I think is cool compared to my boring British ancestry. When he talks he reminds me of the astro physicist out of the movie The Day The Earth Stood Still staring Keanu Reeves, if you watch the trailer you’ll see what I mean. And so at least twice a day I imitate his accent, ‘Thid you feel thad?’ He disagrees that he sounds like that, but I know it’s true.
Sahand stayed for three days and it was good to see him, he always has a good story to tell. Most people have boring stories. Not Sahand.
I can’t tell you the best story he told me during his visit because it’s to personal, but I told my friends while I was high in Amsterdam and I laughed so hard I had multiple tears rolling down both cheeks. It was in the middle of the street too, so people were looking at me funny, but I didn’t care because I was high. A lot of people don’t like cannabis because it’s a drug, but how can you hate on something that makes you laugh that much without having any side effects (in moderation of course). Alcohol and nicotine and all those medicines that the doctor tells you to take if you get sick, they are drugs too, and they don’t naturally grow in the ground. When I told my parents I got high and laughed my way into the new year, they weren’t annoyed, in fact my Mam replied saying, ‘Did you know a laugh is a smile that bursts?’ Which I thought was both sweet and true.
Assuming Parato’s Law is correct (and I think it is) probably eighty percent of my time in Amsterdam was spent laughing, and the other twenty percent eating pizza and drinking hot chocolate (Paroto’s Law says that everything can be divided into an 80/20 ratio, for example you probably wear twenty percent of your wardrobe eighty percent of the time, or you vacum eighty percent of your carpet and leave the other twenty percent that’s under furniture, etc. you get the idea).
I couldn’t even tell you the names of the cafe’s we went too, but I know we bought the weed from a place called Babylon (We used the fact that it had a Jamaican flag outside as an indicator of good quality), but there was nobody in there that looked like they could be from the caribean. Even the people selling the weed were just normal looking white guys. Why dont they employ Bob Marley lookalikes? It would greater enhance the appeal of buying it there. Maybe it would even have a placebo effect and make you believe you’re more high than you really are simply because you bought it from somebody who looks like they themselves would only smoke good shizzle.
When the trip had come to an end we had one last blazing session. It was the most intense because we knew we had to leave the city and the country, and so we had to smoke everything we’d bought. At first we couldn’t move from the cafe, it was like as if someone had nailed our clothes to the seats, like you could try to get up but then you’d reach a certain limit and have to sit back down again. But eventually we managed to muster up the energy and we left the cafe walking through the city square where the street entertainers stand. Some of those entertainers are so bad. One was dressed as the statue of liberty and looked like a seven year old had made his outfit, another pretending to levitate, but everyone knows how that tricks done. And a Darth Vader imitator. His costume was pretty cool, but he didn’t do much, he just stood there looking evil, but then someone gave him their dog to hold and he didn’t look evil anymore. 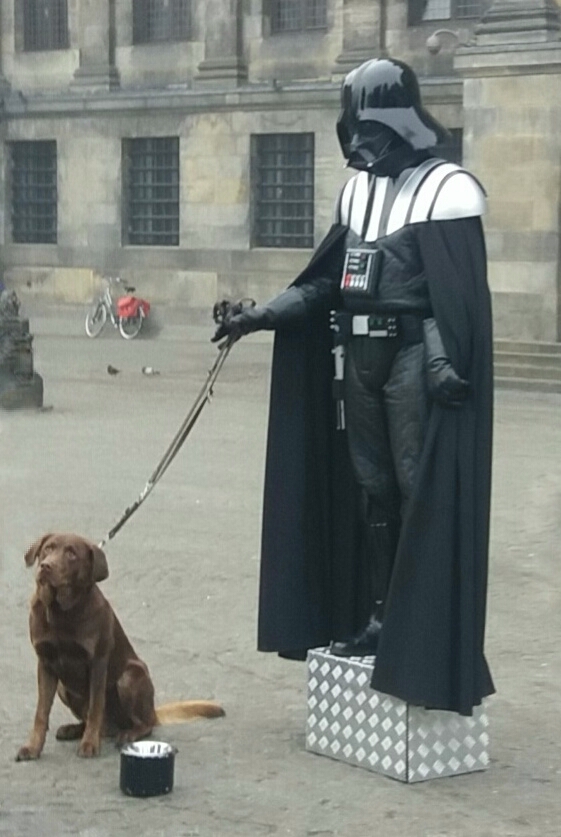 I almost laughed as hard at Lord Vader as I did recalling Sahand’s story. Then as one final pit-stop, we each bought a sweater from this cool urbanwear grunge shop. It had a changing room which was just a curtain in the middle of the shop, and there were no mirrors behind the curtain, so you had to look in the mirror in the shop in front of everyone, and sometimes when you try something on it looks bad, it’s a weird feeling when you look up and see other customers who are strangers and they are staring and also judging if the outfit looks good or not. I didn’t really care if they liked it or not but it wouldn’t hurt to have a mirror behind the curtain. I think they do it so that the shop assistants can look at you wearing your potential purchase and lie by telling you you look good when really you don’t.
I’ve been to Amsterdam a few times and I think I’ve bought clothes every time. I guess that’s what I like best about the place, good clothes and good weed.