I’d never been in a proper cave before, my first thought was whether the air would be different down there, or if there would be enough oxygen. Obviously with it being a guided tourist trip I knew none of these thoughts would really matter. The coach trip that took us to the caves was completely diverse, a mix of nationalities including Germans, Spaniards, Italians, a few Polish and Welsh, but mainly English, I was sat directly behind the driver with the tour guide on the opposite isle. I didn’t mind how much she liked to waffle on about her son being an ex spanish karate champion because she shared her liquorice with me, her charisma was endearing too.
She had gotten on the bus with half her shoe missing, after her new puppy had eaten one of the soles, she said she never had time to change them, so during the journey there we stopped off at a nearby shoe shop. She hopped back on wearing a fresh pair of sketchers, and continued charismatically giving all her opinions about Kate Middleton and the royal aristocracy, and occasionally a sweet old Welsh couple would chime in with their views too.

When we did eventually arrive at the sandy car park, we were inamongst lots of trees and shrubbery, you would have never guessed thirty metres below our feet lay an underground lake. We started our descent down lots of stairs before finally entering the caves. Stalagmites they’re called, pointy jagged rocks of different shapes and sizes some tiny, some huge, it almost felt like stepping into another world, it reminded of the planet vulcan from the movie Star Trek. The pointy eared man in front with his funny eyebrows enhanced the image for me, while he completely ignored the no camera policy and snapped away. Because the caves are so well lit, it all adds to the effect of it being fascinating to look at. 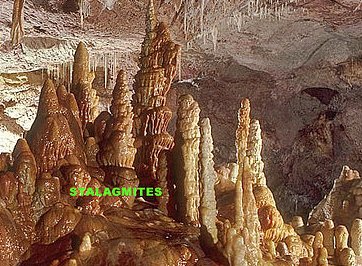 I was surprised at how vast the caves were, we must have walked a quarter of a mile through them before we eventually reached a seating area with a capacity for around a hundred people. Here the staff in the caves waited till everyone was seated then dimmed the lights. Whilst sat in the dark they gave instructions for how to exit the caves, and information about how the caves were brought to the publics attention around the turn of the 20th century. Then there was silence. We all sat in darkness wondering what was about to happen. There was nothing for a few moments, only the sounds of hushed european voices muttering. Then slowly a small row boat creeped across the surface from around a corner at the back of the cave, it was decorated with fairy lights, not the multi coloured kind but those all white and dreamy looking ones that only posh people used to have on their xmas trees. 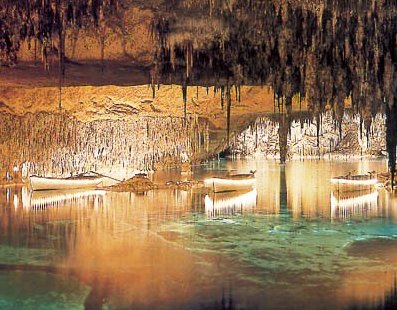 Unexpectedly music began to play from the boat, then there was another boat following, again dressed in  illuminating fairy lights. As the vessels got closer it became apparent that the music being played was coming from a live orchestra onboard the wooden row boats, it was all a bit surreal to be honest, like something you’d see in a dream. If I’d been sat by myself I’d have most likely been a bit freaked out by the whole thing, but the seating capacity was almost full so we all shared in this eerie experience.

After the last of the boats disappeared around a dimly lit corner of the caves the main lights were turned back on and we all had to climb what seemed like hundreds of steps back into the open air and sunshine. Admission into the caves cost 12 euros, and on the way out there is a souvenir shop where you can purchase detailed pictures of your trip.