My initial thought on receiving my request to do jury service was a one of angst. It would me mean taking a minimum of two weeks off from work (although they do cover any losses you incur up to a maximum of 65 pounds each day). Being self employed meant this could potentially make matters difficult if I were to get involved in a long enduring high profile courtcase (they can last months, sometimes longer), which is quite rare but still a possibility. Then there was the moral dilemma, deciding somebody’s fate seemed on some primitive level a little barbaric, surely the odious among us who harbour hateful thoughts towards the accused (whether guilty or not) would be getting given their chance to declare, ‘Send him to the slammer!’ There again, I’m sure the harmonious would outnumber the abhorrent, ‘Ok, I’ll do it!’ I agree with myself… not that I had a choice, since you have to do it by law anyway.

When I imagine people on the jury bench I see people in smart attire, suits, shirts and ties. So I decided to wear my best suit and look my best. As it turns out, you can turn up in jeans and a t-shirt so I looked a little overdressed in my charcoal grey ensemble. I still wore a shirt most days anyway though. If I were the guilty scoundrel being condemned, I’d prefer to be getting told the verdict by someone who at least looked authoritative.

On arrival there will be someone sat at a desk as you walk in. You register your name, and get given your canteen card, which entitles you to up to five pounds each day to spend on your dinner. It’s enough, but there’s not much else to do but sit in the large waiting room with the rest of the jurors waiting for your name to be called for a case, so I would regularly reunite with paunchy other jurors for seconds and thirds purely out of boredom. It reminded me of school dinners except the mash potato didn’t have peas hidden in it.

I guess every jurors waiting room will be different in relation to the size of town or city it’s in, but I imagine they usually have the same amenities in each, a television to watch, magazines to read, a few books and games, maybe a pool table.

Depending on whether you get assigned to a case straight away, you could be waiting all day and still not get called, so unless you have a good book to engross yourself in, you may get a little restless at times. The scarcity of court cases will make it all the more exciting though once you do get called.

The usher will be standing next to the front desk guy, who calls everyone’s name. It’s usually about 12 people. Then you all congregate around the usher and follow him/her to the designated courts adjoining waiting room till your needed. This bit doesn’t take long, before your asked to enter the court room and take a seat on the jurors bench. Then you swear to tell the whole truth, nothing but the truth and whatever else was written on the laminate card you read from. In front of you will be some blank paper and a pencil, presumably to take notes, not to draw caricatures of the men in black gowns and peculiar wigs, which can be hard to resist at times since they do talk a lot. I wouldn’t be surprised if some jurors had actually fallen asleep on them chairs at some point. I however, continued to listen intently, not wanting to miss any significant information that could prove to be crucial later on in the decision room. 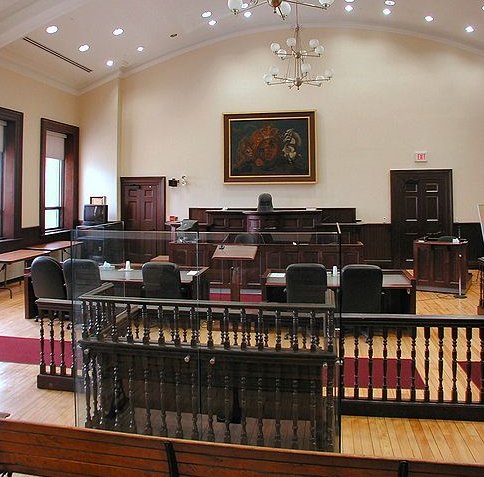 I only got to do two cases, and each one lasted no more than a day. Both were similar cases of alleged assault, with the second one being dismissed through lack of evidence. We found the first defendant innocent. Everyone was in unison of this decision, as it was quite a clean cut case. So after being shown into the decision room it only took us about 15 minutes to decide. You get your mobile phones confiscated and if you can’t all come to a decision within a couple of hours you get ham sandwiches. If I was destitute I would have considered becoming a hindrance to those jurors of the round table, just to get the free grub. Once you have all agreed, you buzz the usher and return to the courtroom to pass the verdict (one of you will have been voted to stand up and announce this) then your pretty much out of there straight away.

In retrospect it was quite monotonous for the majority of the time. Perhaps if the trials had been more controversial it would have added some spice to the experience, but either way it was still fairly interesting.